The man simply known to many as PH has been with IYH since the beginning days. PH was one of the loyal IYH'ers during our early wars with other much lamer wrasslin shows. PH was part of the infamous Terry Funk interview of 2005. Where Terry said he liked the name Phuckyou, and thought 420 was a shooting star press reference. PH went to wrestling with Jack, Flea and the low life Jai. And PH is the only man in Heady history to put Jack in his will. 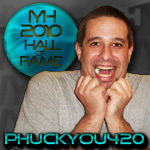