The first inductee into the IYH Fan Hall of Fame 2010 is The Bob Colling.

The Bob Colling has helped IYH tremendously over the last year. The best recap man in the business. Bob's IYH recaps can be read all over the internet worldwide. Bob can also be read on his own website where he recaps wrestling shows and writes very interesting columns. Bob can be seen on the IYH message board and chat room often.

We are proud to welcome The Bob Colling into the IYH Fan Hall of Fame Class of 2010. 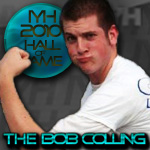