We are proud to induct the second member of the class of 2008 IYH Fan Hall of Fame...William "Walkie" Walker.

For his loyalty and support of the IYH franchise we present him with this great honor. Walkie is one of the original IYH fans, and callers. In the early days of IYH Walkie was a weekly caller, who garnered fame from his unique voice and catch phrases such as "Chill man chill" and "That's not cool". Walkie and his brother Chuck entered into a deadly debate with Barbie Richards over the merits of Hulk Hogan. Walkie quickly became part of the IYH family, and was part of the original series of IYH fan avatars with his trademark hat. Walkie has won many Heady's in the recent years. In the year 2008 Walkie became part of IYH history as the IYH Scientist revealed him to be Jack's long lost son. 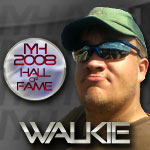