The third inductee into the IYH Fan Hall of Fame 2009 is Spec Sun.

Spec Sun is a long time fan of IYH. He also is a regular contributor to the message board, chat room and to the live show with his calls. He is well known for his infatuation with Mickie James as well his love for old school wrestling. Spec Sun has his very own video feature right here on IYH known as the Secluded Paradyme. He is also a member of the IYH Horsemen group on the message board. Spec is one of the few IYH fans to have met Jack, Incher and Flea in person at the 2009 NWA Fanfest where they took several pictures together and ate dinner a few times.

We are proud to welcome Spec Sun into the IYH Fan Hall of Fame Class of 2009. 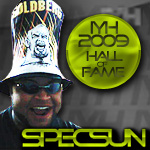 Research shows that adequate D levels can reduce heart disease risk, ward off certain types of cancer, relieve back pain, and even help prevent depression, but most of us don't get nearly enough of the 1,000+ IU daily that most experts recommend. 1) median home values were nice and low at about $109k, 2) home values never went sky high, so they not likely to fall as much, 3) the economy is pretty stable, 4) it best to buy rentals for cash flow as opposed to the fix/resell model.After we expanded there, we learned.
http://www.nhlcheapjerseys.ca/custom-jerseys-washington-capitals-c-386_399.html
Reebook 2011 Stanley Cup Jerseys
http://jadesantis.com/air-presto-c-3452_3548.html
Reebook Columbus Blue Jackets Jerseys
http://www.nhlcheapjerseys.ca/mens-jerseys-c-301.html
chanel outlet italia
http://jadesantis.com/jordan-11-low11-c-2912_2931_3161.html
chanel purses for sale
http://www.cafms.org/wiki/isabelmarant.php?id=3
nike free 3.0 v4
http://jadesantis.com/new-balance-brighton-c-2912_2945_2989.html
occhiali gucci